Working retail this particular time of year is not without its set of challenges. I am fortunate for a couple of reasons. The first being that the company I work for has a strong sense of wok-life balance and they want to make sure that the balance is maintained. It’s a blessing to actually work for a company that says it and practices it. The other thing I’m happy about is that I work in the corporate offices. We still have to work around the schedules of the stores, but I’ve always had little things-like my weekends- and not the funky retail ‘weekend in the middle of the week’ BS.

Because of some changes in scheduling, we are adding people to our Saturday and Sunday shifts. Factoring several things in to the equation, having me as the Sunday person makes the most sense at this time. Sooooooo….yeah.

I thought about it. Eventually I’ll be able to have Friday and Saturday off so it will again feel like a wekeend. As it stands, I’ll be having Saturdays and Tuesdays off. I won’t have a weekend off, per se but I will instead have two Friday nights.

I’m not sure if it will suck or actually be a good thing. For now, I’m focusing on the many positive aspects of it. I’ll address any negative aspects sometime down the road.

I have this notion in my head that the mid-week day off will be a good day for writing. I think I will need to make sure it’s a day I don’t sleep in too much (though some alarm clockles days will have to happen-it’s a must). I will also probably at some point switch Tuesday for Thursday so I can go Karaoking on Wednesday nights again.

All in all I think it’s going to be OK. Just an odd kind of thing to get used to, I suppose.

Speaking of writing, no. I haven’t really done much this year with the NaNoWriMo. By all accounts, I should be 1/3rd in to my novel by now. And maybe I am–in my head. I have the begging and the end written. The middle bits are playing out in my brain…kinda like when we were teens, playing with the cable converter box to try to get some kind of clear picture of something we really shouldn’t be watching anyway. I could have described the image that came through the fuzz, but it was probably way off from what was actually being broadcast.

It’s like that when I write, too. I know there’s something there, but when the image comes through clearly is when I have he best sense of what I’m actually describing.

So..yeah. There we are. I know it’s not the most insightful of blog posts. The last couple of weeks has been so nutty that I guess I just needed to see if I could still write. 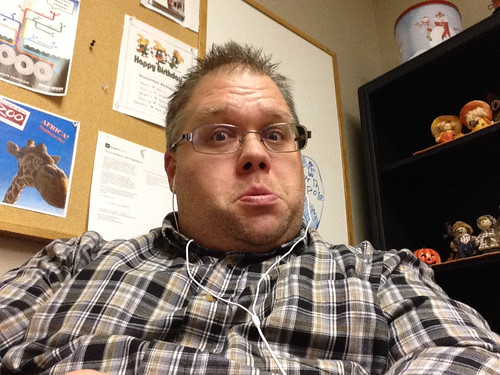 Yeah. When I write, sometimes I look like that.

Have a great rest of your day my friends!