The year was 1996. I don’t know if this was the actual day or not, but in 1996 I was in Chicago for work (much like today). My boss asked me if I had ever had Chicago-style pizza. Thinking that Pizzeria Uno counted, I assumed I had eaten something that was a close approximation of Chicago pizza.
I couldn’t have been more wrong.
He took me to the place serving his favorite Chicago pie (as he called it). It was downtown and within walking distance from the hotel. So we did.
I have since learned a few things. The only place to get Chicago pizza is in Chicago. From a Chicago pizza eatery or restaurant. Anything else is “Chicago-style” and really not quite the same. People are fiercely loyal about which Chicago pizza is their favorite. One is Gino’s East. I haven’t had it, but my ex wife did and seemed to enjoy it. I think. The other is Lou Malnati’s (or simply “Lou’s”). I have had Lou’s and it was also quite good.
And then, there’s the one I had first. Twenty years ago.
Giordano’s. 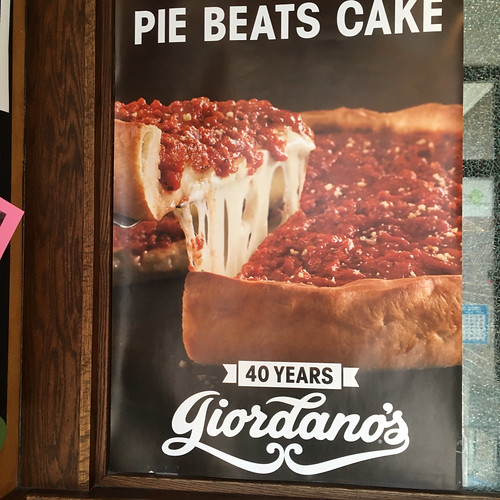 I can remember ordering and asking Terry if he wanted to split a large pie. He laughed and nearly did a spit take with his beer. “Oh no, man. We’ll split a small and you’ll have leftovers.”
It was my turn to laugh. I hadn’t had leftovers from a small pizza since…well…never. But he was the pro, so I took his word for it.
I still wasn’t impressed when they brought that small ass pie to the table. And then the waiter served up the first slice….the cheese…oh my god the cheese. It STRETCHED. That glorious quintessential cheese stretch when you are pulling the slice free.
It.
Was.
Magnificent.
I was hooked. We ate. We laughed. We talked about work. We talked about music. I was stuffed. We were getting ready to head back to the hotel. I looked down at the pizza remaining in the pan.
Two slices. There were two slices left. I had eaten two. Terry polished off a slice and a half. And there were two slices.
Leftovers. From a small pizza.
I was amazed. That pizza became stuff of legends. I had been to Chicago many times since that initial time in 1996, but I had never made my way back to a Giordano’s.
Until today.
I’m in the Chicago area for work and today is kind of an off-day (or rather, day off). So instead of my normal “I’m just gonna eat at or near the hotel,” I looked beyond my immediate surroundings and found a little village called Downer’s Grove that had quite a few things. A microbrewery. An Irish pub.
And a Giordano’s.
There was no question. I mean, sure, I posed it as a question on Facebook. But I knew where I was going as soon as I saw it.
It takes 35-40 minutes to get a stuffed pizza when you order it, so I started with toasted ravioli. 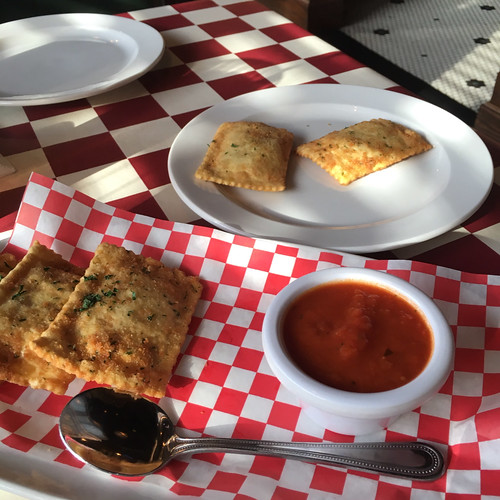 Yes. They are absolutely as incredible as they look.
I was nervous waiting for the pizza. Would it be as good as I remembered? Could anything in real life live up to the glory that nostalgia gives certain memories?
“Sir, can I serve you the first slice?” I nodded.
And then I saw the cheese.
Holy shit. The cheese.
It was at that moment that I realized that my mind had dulled the memory. As terrific as the experience twenty-years ago was, I knew in that moment that my memory had stopped me from remembering how amazing it was for one simple reason: It knew that it was an experience I would want to repeat often but would be unable to. So the pizza became good, but not great in my mind.
Stupid memory. 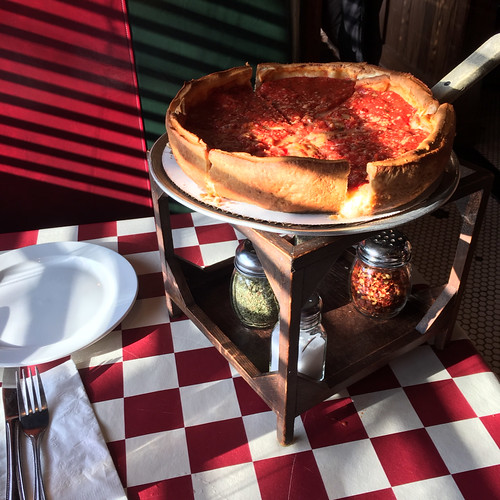 This pizza is amazing. I can’t believe how much I enoyed it, then and now. 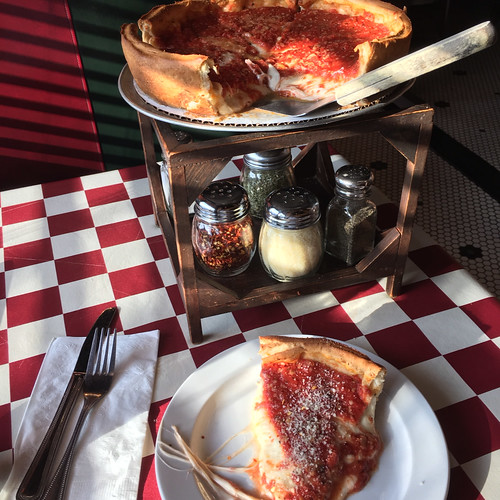 It was a very zen moment for me. Sitting in some little Mayberry town I knew nothing about eating a pizza that had been part of a treasured memory for the last 20 years.
I don’t know how to describe the afternoon any other way except perfect.
Would I like to have shared it with friends and family? Sure. But it would have been a different memory at that point. A different experience. This afternoon was about me. Looking in to the crevasse of my memories and seeing if what I believed still held true, or in this case if what I thought I remembered was in fact as good as the real thing.
Better. Definitely much better.
And I’ve got leftovers sitting in my hotel fridge.
Life is beautiful.
-AT

3 thoughts on “It Was Twenty Years Ago Today”