I have been looking for a perfect combo. But to be fair, there are a few things I seek to attain the ‘perfect’ version of. And to be fair, when I say perfect, I mean perfect for me.

The perfect messenger bag (pretty sure I have it). The perfect back pack. I have 2. One for every day/work and one for travel. Still not sure I’ve found the perfect iPad case or not, not sure I will. That’s not really one of the ones on the quest.
I have found a nearly perfect digital note-taking solution for my needs (although to be fair, it’s actually leading me back to paper…which is ironic and cool at the same time–I’m sure I’ll have more to add on that in the future).
Long time fans of this blog might have picked up on the fact that as I write a blog post, first draft, whatever-I do what writers call “pantsing.”  Pantsing is where you sit down with no outline or plan, often with little more than just a prompt and start writing. As a pantser (there was another name that my friend Carma called it, but I can’t remember that at the moment), but as a pantser, the key is to get in to the moment. To just let the words flow with as little distraction as possible. To that end, I had been on a quest for the perfect distraction free writing tool/software package.
Pen and paper is the obvious choice, but my handwriting speed and my typing speed are vastly different and by the time my hands catch up to my brain, many of the words and thoughts are lost or at least edited prior to me putting them down on paper (which is not something that I want out of the first draft).
Many word processing/desktop publishing applications have a ‘distraction free’ mode. And for the most part, that works.
There is a great application for Mac and iOS called “OmmWriter.” I don’t know if there is a windows version or not, but it’s damn near the most amazing distraction free application I’ve used to date. I wrote 25,000 words of my NaNo project on it and it was amazing. There are no bells and whistles, you just type.
I thought that having a typewriter would accomplish the same thing–and I think that it will, once I get those bad boys up and running.  I think that they will be awesome as a home writing tool, not sure how portable they will be. Hopefully, I’ll figure that out and get them all cleaned up and working over the winter.
Enter the NCOW Writing Retreat. My friend Monica had a device that looked like some fucked up LeapFrog/V-tech looking thing. I had no idea what it was, but it had this cool translucent blue case and it was basically a keyboard with a little LCD screen.
I asked her about it later and she told me it was the AlphaSmart 3000 (or maybe it was the 2000, not sure).  I looked it up and was pretty much gobsmacked.
It’s a keyboard. With built in memory. The display shows you what you’re typing. When you are ready to transfer it over to a computer for editing, you open up a word processing app and connect the device to your computer’s USB port, choose your file, and hit “SEND.”  From there, it basically pushes everything you’ve typed in to the open document as though you were typing it–really quickly.
Like this:
It sounded awesome. But they don’t make them any more. They stopped making them in 2013.
I figured that trying to find one used would be a nightmare, but I figured I’d give it a shot.
Turns out Amazon had them. Many of the models. I settled on the last model made by the company (or the company that acquired the original company), the NEO2.
It just came today.
I’m at Panera right now, writing this blog post on it. 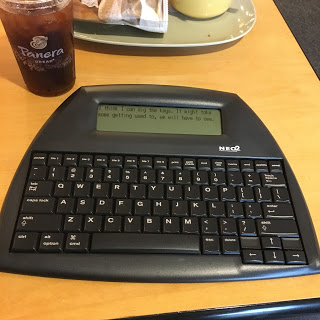 Holy shit does it kick ass.  It will last hundreds of hours on 2AA batteries. If you turn it off, as soon as you power it back on, it goes write to where you left off.
The keyboard is not anywhere near as squishy as a laptop keyboard. It’s not quite mechanical, but the keys have some beef to them. They don’t feel cheap.
In looking at the PDF of the 278 pg. User Manual, they really designed this thing with elementary school students in mind. The keyboard is about the size of the standard Apple keyboard and very responsive, but still requiring a decent amount of pressure.
It’s actually kind of fun to type on if I’m being honest (and why wouldn’t I be honest on my own freaking blog?!?).
The best part is that it’s just meant for typing. I mean, the NEO2 does have some applets that can be loaded, but for the most part it just exists to by typed on.
And I’m so cool with that. I can easily see just throwing this in my bag or a laptop sleeve and going somewhere to write (kind of like I did tonight).  Not tied to wi-fi. Not tied to power. If it got dark, I suspect I would need some kind of back-light (anyone got an old Kindle light?) but other than that, it’s probably the most well made distraction free tool I’ve ever written on (short of the typewriter).
Thank you Monica for continuing to shoe me crazy shit to write with. I’m going to stay away from the perfect pencil quest. I have a feeling if I got hooked on Blackwings, it would be all over. LOL.
It’s funny. It’s been probably 15+ years since I sat in a restaurant and just typed something out. At that time, it was on an old ass PowerBook (with the trackball at the front). It was a Denny’s. And the book was a sort of stream-of-consciousness ‘autobiography’ of the first 29 years of my life. What I didn’t know was that stream of consciousness style was really kind of my voice.
So, just a couple days after the retreat, it feels like I’ve come full circle. When I wrote that book all those years ago, I knew in my heart of hearts that if I was nothing else in this world, I knew I was a writer. And then life happened. And doubt crept in. But I found some really good friends (also writers) and I feel I’ve grown so much.
It’s kind of kick ass and I’m thankful that Chris was kind of pushy in getting me to my first Creative Minds Columbus meeting. And through them I met the awesome writing group in Ashland that just hosted the retreat that was amazing.
You know, looking back, those milestone moments. Those moments when you can say that things changed forever on that day.
That was what the weekend was for me. It was a moment that changed me forever.
Sorry..where was I? Guess I got distracted there for a second 😉
Have a wonderful evening my friends!
-A.T.